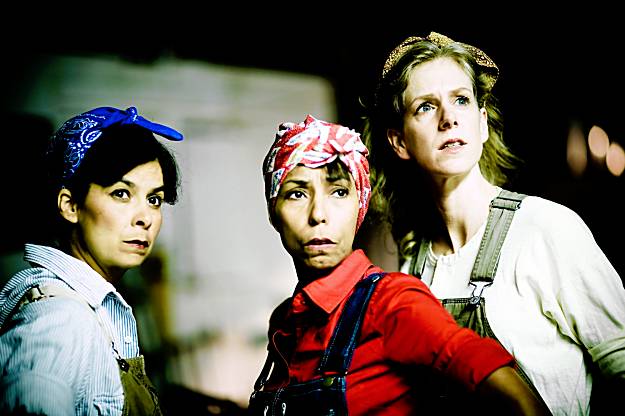 This World In a Woman's Hands
Interview
Jazz vocalist & innovator
MOLLY HOLM Holds the Tone for
This World In A Woman's Hands
interview by Liz Lisle
What is the most compelling part of this story for you?
This World in a Woman's Hands focuses heavily on the stories
of women, especially women of color, at a crucial point in US history.
My passion for jazz has included a parallel pursuit of learning as
much as I can about the history of African-American people.
Marcus Gardley tells the story of African-American women coming from the South to escape the insidious culture of Jim Crow and low-paying domestic work. He leads us through the hard-to-imagine stories--horrific racist acts and the harsh realities of trying to survive as a working woman with children. While immediate financial rewards were to be found working in the shipyards, racism and sexism were still affecting the women's pay scales unfairly, as well as their access to "the better jobs" and decent housing.
Marcus also confronts the status quo of women of color once again being left out of history. Black women have not been properly credited for launching all those ships; nor did their participation in that success translate into good jobs and upward economic movement for them after the war.
This play is also about the gap in the history of Richmond between
the mid-1940's and now. Marcus looks through the lens of WWII and the shipyards and tries to flush out the lore and the realities of present-day Richmond--a city with a reputation of being war-torn, shoved-aside by racism and poverty, and suffering from disenfranchisement of the young people.
Alternately, This World reveals the empowerment of the women as they break through the work roles so fiercely confined to the sacred world of men. And, the characters find inspiration by connecting "as women" across racial lines. They have a new camaraderie of purpose: in their personal lives, in their work, in the war effort, and in their activism to gain safety and job protection through unionizing.
Finally, as Betty Soskin has pointed out, the "herstory" of the "multi-racial Rosie" is also part of an amazing and unparalleled mass mobilization brought about by a unified and critical response to a global crisis. Betty has asked the important question: What can we learn from that extraordinary coming together to now address the crises in our present-day world?
You also created the music for Love is a Dream House in Lorin.
How has your process differed between the two productions?
For Love is a Dream House in Lorin I was brought in during the final month of rehearsals to do a vocal workshop and help discover how music might work underneath the text of an already formed play. Some kind of mysterious and creative alignment took place between Aaron, Marcus, and myself, and by experimenting with "circle-singing" with the 30-member cast three major choral chants evolved. Circle-singing is an improvisational and compositional tool that I learned from working with Bobby McFerrin in the original Voicestra.  I have continued to use this spontaneous style of composing over the years in my own Vocal Jazz Workshop, my Mills College Vocal Jazz Improvisation Ensemble and for other choral master classes and clinics.
Many of the compositions for This World in a Woman's Hands were derived in the same way, but the difference was that we cast the majority of the actors/singers very early in the process.  I ran a series of vocal trainings where I could give the actors experience in the kind of music that I do: music that grows out of the melodic, harmonic, and rhythmic elements of traditional jazz, avant-garde or free jazz, blues, North Indian raga, modal improvisation, Afro-Cuban music influences, new or experimental music influences, and extended vocal techniques.
I should also say that I have had to "sit down" and write some of the pieces and…it is really hard for me to sit down, alone. I'd much rather be up and about, physically active, interactive and collaborating with other people. One additional mode--fun and challenging--was to work side-by-side with Marcus, finding a way to put his poetic words to music for several of the "song" songs. 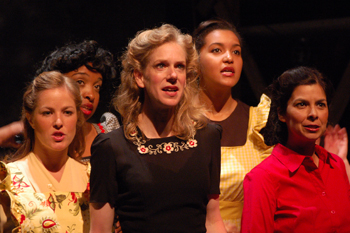 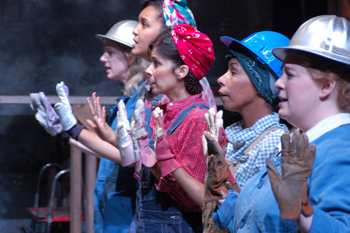 If there was one person, living or dead, you'd invite to experience this play and it's rich vocal tapestry,
who would it be?
Just one!!?? How about: My Mom and Dad, Dr. Carl L. and
Connie J. Holm--my Dad was a veteran of WWII and my Mom worked as a clerk in the shipyards up in Portland Oregon; my high school/college spiritual and artistic mentor, Margaret Byers, a painter and "unconditional-love bohemian" who was friends with Henry Miller and Man Ray down in Big Sur way back when; the late singer/actor Jacquii Marshall, who was my musical cohort and on-the-road "roomie" in George Coates' Actual Sho (she would have been slammin' in this piece!); my kind and gentle friend, saxophonist Ron Stallings, who died from cancer earlier this year; and, my sweet Aunt Louise (Cross), who always had a ton of attention and kindness for all of the children.
There is such a deep rooted connection between the music in this show and the time period from which is springs.
How did this come about?
This is hard to answer. I don't really know except to say that my life-long love of jazz is heard here. I grew up listening to jazz as a kid because my Mom was completely absorbed in it. I heard a lot of music from the 40's, 50's, and 60's: Duke Ellington, Count Basie, Joe Williams, Johnny Hodges, Lester Young, Ella Fitzgerald, Sarah Vaughn, Harry Belafonte, Wes Montgomery, Charles Mingus, Miles Davis, Dizzy Gillespie, Astrud Gilberto, and Antonio Carlos Jobim (and many more). Equally important, I am IN LOVE with the music of the African Diaspora: especially early African-American work songs, shouts, and spirituals; the Yoruban (Nigerian) sacred songs that are part of the Afro-Cuban Santeria religion; Afro-Brazilian music; and the Senegalese drumming that my brother Carl has studied, recorded and performed extensively (check out his Village Pulse label). Linda Tillery, an African-American "roots-music" virtuoso (one of my all-time favorite singers, and a mentor for me), has played a big part by doing several workshops with the cast of This World. In particular, she brought us the mesmerizing Texas prison work song, "Ain't No Mo' Cane On Dis Brazos."

Back to Press Page